This is a theory that I feel can only truly work in relation to economic relationships, between a Core Area and its peripheral zone.  This allows us to study the potential for inter-regional connectivity within the archaeological record.  The diagram below illustrates this in its’ most basic form. 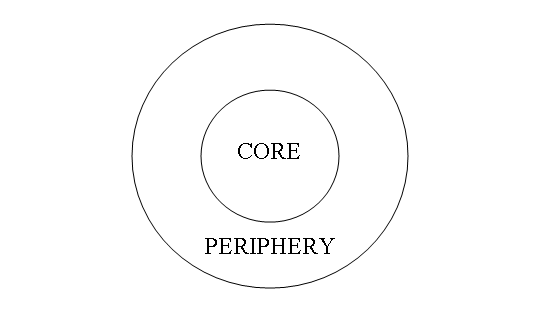 It is however, well known that societies are not that simple, in the case of the Roman World, (which Thanet became part of quicker than you may think) there are Three Zones


When considering the , they had the three zones, but external to the Outer Periphery, there were points of contact.  These were Barbarian peoples that traded with the Inner Periphery as seen above, but they too develop a Peripheral zone as seen below…


The relationships between the Core and the Periphery are not always simplistic as there are opportunities for Core zones to develop within the Periphery.  This shows that social relations are not of a static nature and effectively illustrates the fluid nature of the economic systems developed to support them.


The principles of Core-Periphery Theory therefore provide a model which can be usefully applied to the archaeological record.  It allows for a means of study into relations between two distinct interacting regions, permitting scope for consideration of the ambitions and perspectives of both Core and Peripheral communities.  A major flaw of the theory is that of the terminology, the use of the term ‘Core’ provides a sense of greater importance and as such power is presumed, thus creating preconceived ideas and establishing a bias in an archaeological study.


See it wasn’t that bad after all….