An Adventure in Cornovii Territories...

What better way is there to spend a summer’s day than exploring a hillfort? None…I didn’t think so! So this Silure ventured deep into Cornovii territory to explore Old Oswestry Hillfort.  Due to a few technical issues there are only photos of the Southern end of the fort; it seems the Cornovii want the Northern end to remain a mystery.


The site is now looked after by English Heritage, but quite fittingly it is part of a working farm and is now home to an array of sheep and cows.  Some of you may disagree with this, but the condition is perfect and preservation is better than many similar sites such as .  Besides this the sheep and cows provide some much needed character and make it far easier to picture in a Time Team type way what the inner hillfort may have looked like. 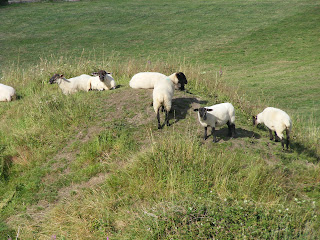 The above picture is probably my favourite of the day, it’s the tour guides having a well earned rest! Along the Northern half of the Hillfort the sheep graze freely and seem keen to show visitors the way to go and even wait for you if you stop. Not sure if the Cornovii would have been quite to welcoming to a Silure, or anyone else for that matter, this is one huge set of defences after all.  These lovely ladies greet you at the Western enterance and pretty much stay with you until you get to the Eastern enterance, then they cut through one of their many paths and rest on the second rampart.

English Heritage provides much information about Oswestry Hillfort so I won't go into too much detail here.  My focus is largely on the original phase, which is the hillfort plateau, the first and second rampart and probably the entrence ways.  The entrance to the East seemed to be situated slightly off the usual South-East axis that most hillforts conform to, this maybe a later edit to the monument, but, it seemed unlikely when assessing the ramparts. 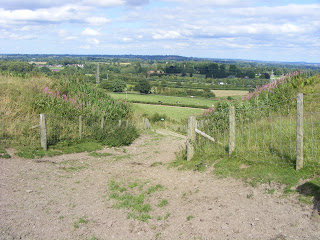 This is the view from the top of the fort looking down the Eastern entrance way, as you can see the opening curves to the North, but, it then swings back to the South.  It is now used as a passage way for cows, who very kindly let me stand amoung them to get this shot...I had to be extra brave! If the original entrance way swung back to the South I don't know, but that is the direction of the modern farm.

My last real observation, at least archaeologically speaking was an 'earthwork' to the South of the hillfort as shown below: 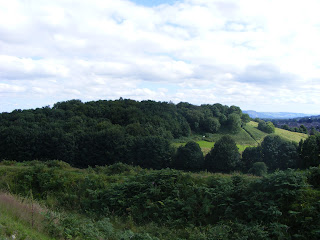 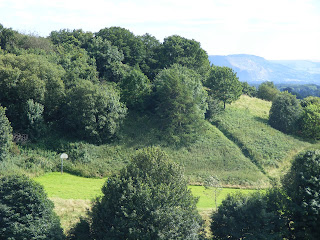 As you can all see, it's quite a substantial mound, but the trees hide the shape very well.  This maybe a coincidence however, its' location and size have made me suspicious of its' origins.  I haven't been able to find any information on the mound, but judging by the tree line it has an expansive flat area at the top.  The upper image also shows signs of  a second lower tree line, possibly indicative of a ditch.  It is not unknown for Iron Age communities to occupy multiple earthworks within such close proximity, possibly accommodating a large population.  I feel it is more likely to be for seasonal use, with their livestock benefiting from such structures during the Winter months, Summer uses is a little more ambiguous however!

Overall Old Oswestry Hillfort is one of the best hillforts I have had the fortune to visit and I definitely recommend that if given the chance you all visit!

I'm told all good things come to an end...well the Romans saw to that! I'm no lover of those pesky Romans and firmly believe that they should have stayed in Rome, but, just for a sunny July afternoon Wroxeter changed that! Another very well looked after English Heritage site and very reasonable entry prices too (always a bonus).

The good old audio guide comes into its' own here, it allows you to take the site in on your own terms so you can do it as slowly or as swiftly as you like. I was shocked by how slowly I explored considering its' origins, but for the first time ever, I think I truly appreciated what it must have been like for the Britons when the Romans turned up.  The monumental scale of Wroxeter's bath house really made me take a step back, the whole landscape would have become unrecognisable overnight...there is little wonder there was so much objection yet so much adaptation.  Such changes must have been horrifying but at the same time mysterious.

Roman Wroxeter largely remains safely underground, the only section 'open' is the bath house and a small market place that was in such close proximity to the baths I would assume they worked hand in hand.  Below shows a image looking across the site from just behind the short lived outdoor pool: 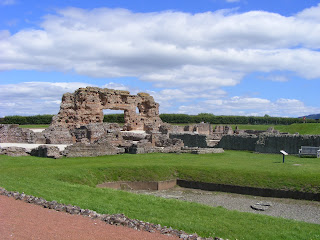 The surviving height of the structure shocked me, considering its' antiquity, but much of it is below floor level and demonstrates a beautiful hypercaust system: 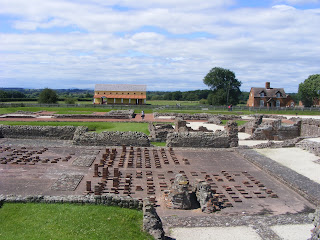 The level of preservation is remarkable and as such in small areas there is Roman 'cement' still visible, I was slightly concerned that this can be walked over and is regularly and not always by children! In a similar fashion visitors spend a great deal of time sitting and standing on walls, so it remains to be seen how much longer it will remain in such lovely condition.

You may or may not know that the infamous Wattling Street ran through the center of Roman Wroxeter and still makes its' present felt today: 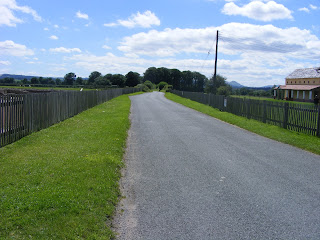 After crossing the road I was greeted by this...I'm sure you will agree its a pretty impressive building: 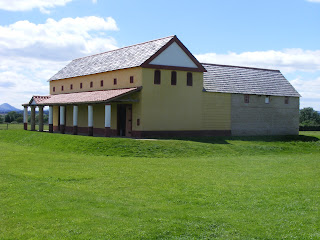 This was built by modern tradesmen using the techniques and technologies of the Romans.  It was filmed and turned into a mini television series for Channel 4.  I'm sure you all agree they did a marvelous job and can appreciate how excited I was to nose in a Roman Town house.  I mean it isn't something you do everyday afterall....then I was greeted with this..... 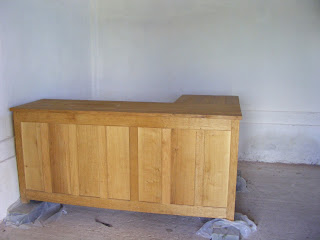 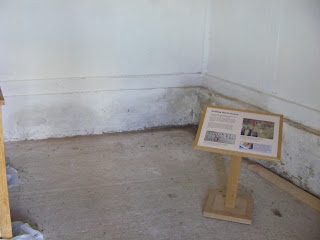 Not exactly the Romano-British furnishings I was expecting! I can honestly say I have never been so disappointed with a heritage experience in my life....I was almost speechless! The work that has gone into the construction was truly let down by the lack of furnishing the town house.  I was eager to have an archaeological experience that truly allowed me to appreciate the Roman use of space...it seems I will have to visit Pompeii afterall!  This did not ruin my adventures in the lands of the Cornovii but it was definitely a long way from enhancing it.  Much of the blame is to lie with English Heritage and the way they build the town house up to be such a beautiful reconstruction...which structurally it is, but it is hardly the full experience that is alluded to in advertisements, thankfully this was an addition to my adventure and not the purpose of it! 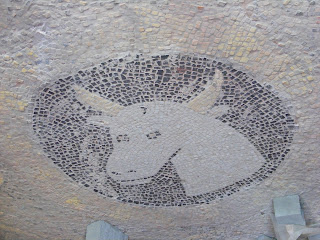 The image of the mosaic is by far the best from inside the house, it's such a sweet little thing, even if it is upside-down to the visitor. Hopefully one day the room will be dressed in a way that reflects his character and brings that added dimension to the town house.

I hope you enjoyed my little adventure and should you want to share a few of your own I would love to read them...you know where the comments box is :o)
Posted by Cez at 14:39